In the current information age there is a boom for visualising data, there is no doubt about that. Almost everything which is produced, it is visualised. Infographics, information design, diagrammatic representations, diagramming, data visualisation, mapping, these terms have become commonplace in the last decade or so. However, many of them ‘were born’ years ago, but ‘reborn’ with the use of digital tools. In this post, I will focus on two of them: diagramming and mapping. These terms are sometimes used for different purposes and sometimes as synonyms, depending on the context. 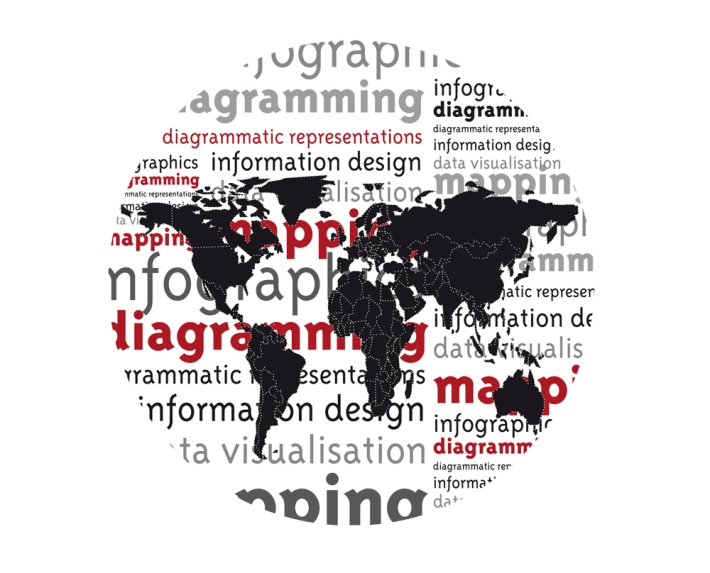 Diagramming. Diagrams are used to communicate specific complex information across an increasing range of fields. They present hierarchies, inclusions, simultaneity, distinctions of levels, multiplicity of kinds and complexity of connections (Frascara, 2001; Tufte, 1983, 2006; Bertin, 1983). They have become known as mind-mapping strategies dedicated to integrating knowledge (Frascara, 2001), in addition to communicating and presenting information. The functions, advantages and disadvantages of diagrams have been widely discussed, as well as their nature and the cognitive process involved in both construction and decoding (Frascara, 2001). They are often used in PPT presentations, for summarising information, in statistical data, scientific publications, and medical reports, among others.

Mapping. Originally, mapping has been the language of Cartography and geographic maps its final outcomes. Before the advent of aerial photography, satellite tracking and computerised data-gathering, a map was expected to represent its territory with comprehensive accuracy. Free of that responsibility, cartographers and designers could manipulate their data into any number of visual representations. Currently, mapping has (re)emerged in the information age as a means to make the complex accessible, the hidden visible, the unmappable mappable. The printed map functioned as both database and visualisation in one medium. Mapping creates strategies for visualising information that make new interpretations possible. Three spaces are linked through a mapped space: the information space (vast quantities of data), the physical space (navigating the city, region or globe), and the social space (representing relations within and between people or organisations whether cultural, political or even random).

As opposed to written and verbal language; diagrams and mapped information have an unlimited capacity to represent complex information. In both books ‘Else/Where: Mapping, new cartographies of networks and territories’ and ‘Mapping, an Illustrated guide to graphic navigational systems’ complex information covers a wide range of data such as activities that have a relation to physical spaces (social or political migrations, commercial systems, public transport), or mechanical, electronic or biological systems (the human body or electronic circuits); as well as ideas and information, logical systems of philosophy, religion, politics or science. In simple words, the term complex information is mostly used to refer to great amounts of data, which require deep analysis to obtain clear understanding.

Mapping is often (more) associated with data visualisation and diagramming with information design. However, in the information design context both terms are related and have similar aims: to produce clarity of information. Diagrams help map connections and create visual links between data components, facilitating and improving understanding.