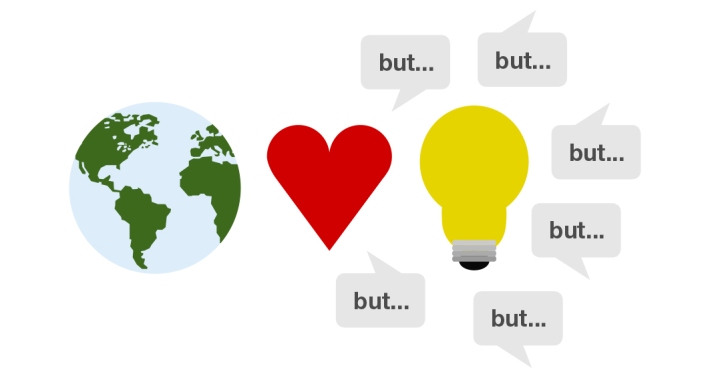 People love design and innovative ideas, but many are also hesitant when they have to take a risk and put those ideas into practice.

Design has changed. And designers’ role has changed too. The Future of Design Education Group describes designers as “starting to address some of the major societal issues facing the planet.” Challenges of this complexity need creativity, original ideas and fresh points of view. Taking risks and exploring unknown paths are now necessities, not choices. However, I sometimes wonder whether the world is really prepared to embrace this mindset intrinsic to designers’ way of working and their “wild” ideas.

Based on my experience working in this domain, the following cyclic behaviors can hinder designers’ potential:

Everywhere, people advocate for innovation and love sharing how well everything is going. In education, students are encouraged to innovate and explore alternative ways of solving problems. But admission offices do not generally select students for their ability to challenge the norms or social constructs; rather students are selected based on their ability to follow the rules and check all the boxes. Then, very frequently students (and faculty) are asked to talk about their successes (probably we all remember one or two TED talks that talk about failure or that professor’s failure resume), while unsuccessful experiences stay mostly invisible.

The story is pretty similar in industry. People hire designers for their creative way of working, but on the other hand many clients are reluctant to commit to ideas that are too different from traditional ones. Like in education, when it comes to failures, these are not popular. In some cases, even when there is evidence that indicates that something is not working, clients ignore such evidence and present a more successful side to the story.  I am not advocating to fail for the sake of failing, but things not working as planned is part of the life.

In this context, how can designers do their job if their ideas and way of working are questioned? Do designers really have a “seat at the table”? Are designers actually leading the teams and making the final decisions?

Designers have certainly changed, but now others have to change too.

Interestingly, a simple step that could start this change emerged from a recent research study we did at Sense Information Design. As part of a client project, we talked to more than 40 employees of an organization about their values and what was important to them to do their work better. Many of them expressed how tired they were to read and hear only about their colleagues’ successes. Enthusiastically, they argued that most of their learnings have come from things that did not go as planned (failures!), rather than from projects where everything went perfect. They referred to these examples as “Sh*t stories.”

Creativity literature stresses the need to reframe “mistakes” or “failures” as learning opportunities. Openly talking about the things that go wrong (for example, in a project) helps better understand what could have been done differently, and learn from what we did. This approach is not secret. Many large companies follow it, like Pixar. Ed Catmull, co-founder of Pixar and president of Walt Disney Animation Studios, recognizes that this approach is not easy as sometimes they need to “resist [their] natural tendency to avoid or minimize risks.” But they do it because they have developed an internal culture where failures are part of the process.

Idolizing success perpetuates risk aversion and the creation of the same type of solutions, which becomes an issue when the problem at hand requires a very different type of solution. This cycle also communicates a fake reality where no one seems to make mistakes ever and everyone gets it right always. This is a big problem for students or  employees when they are terrified of sharing ideas that are different from what others have said or from what the teacher or manager thinks. As a result, many would rarely pursue a very different path from what it is seen as the expected one. Fast forwarding into the future, when these students enter the workforce or employees become decision makers, they bring with them the same way of seeing the world and aversion to taking risks, continuing the cycle.

As the Future for Design Education Working Group states, “to be successful, we must accommodate all beliefs and perspectives.” However, if those in charge of making decisions keep only asking for and celebrating successes, but do not encourage a culture where failing is a natural part of the journey, the work of designers would barely make a difference.